An excerpt from The Third Option

Do you find yourself getting angry or defensive when you think or talk about race? If so, I want you to know that 1) you are not alone, 2) racism corrupts your soul, 3) culture promotes racism, and 4) there is a third option that can set you free.

Everyone is affected by racism. Nearly every American has been a victim or a perpetrator of racism, and most have been both. On average, 83 percent of Americans believe racism is a problem in our nation. This number has remained steady during the past two decades but the latest polls show a spike in the number of Americans—now 58 percent—who believe racism is a “big problem.”

Racism affects us all because it is a corruptor of the soul that degrades and devalues those who look different from us. When we allow racism into our hearts, we minimize the priceless value of God’s image in others, which limits our ability to honor, love, and serve them the way God calls us to.

Culture plays a big role in perpetrating racism by wrongly insisting there are only two options you can choose from: us or them. Culture pits one group of people against another by promoting a zero-sum mentality that claims one must lose for the other to win.

God, however, offers us a third option that stands in stark contrast to the two that culture offers. This option invites us to honor the presence of His image in every person we meet.

When we honor the presence of His image in others, we acknowledge their priceless value as precious and beloved of God. The third option empowers us to see people through God’s eyes, enabling us to honor them and honor the potential of His image in us.

Some of the greatest heroes of our faith overcame culture’s temptation to buy into the us-versus-them mentality. One example from the Old Testament is when Joshua, preparing for the battle of Jericho, asked an approaching messenger of the Lord to identify whose side he was on:

Now when Joshua was near Jericho, he looked up and saw a man standing in front of him with a drawn sword in his hand. Joshua went up to him and asked, “Are you for us or for our enemies?” “Neither,” he replied, “but as commander of the army of the Lord I have now come.”

Then Joshua fell facedown to the ground in reverence, and asked him, “What message does my Lord have for his servant? (Joshua 5:13-14)

In this passage the Lord’s messenger offered Joshua a way out of culture’s trap by presenting him a third option. Joshua responded to the presence of God in humility and obedience, and reaped the benefits of God’s blessings in return. God personally intervened on Joshua’s behalf to deliver him an overwhelming victory at Jericho, in response to Joshua’s decision to choose the third side.

Choosing the third option is not easy. It requires intentionality, a prayerful commitment to obedience, and wholehearted trust in God’s provision. But I promise you it’s worth the effort.

When you choose the third option, God Himself will deliver you from an us-versus-them mentality, and free you of any race-based feelings of superiority or inferiority that prevent you from honoring the presence of His image in yourself and others. 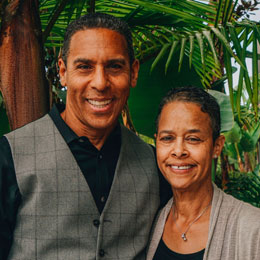 People of all backgrounds want to understand the racial issue that divides our nation and world and what they can do to bring healing. The Third Option book and Similarity Training e-course answers those questions by inviting and guiding people to honor what they have in common. Learn more and register at thethirdoptiontraining.com.